Finnish Industrial Union (Teollisuusliitto) deplores the Finnish Forest Industries Federation’s (FFIF) announcement of the renunciation of national collective agreements. The unilateral exit announcement from FFIF came as a surprise, although there have been signs of this for some time.

– It is really unfortunate that FFIF is now embarking on a path that is eroding the Finnish labor market system. This well-functioning system has brought and will bring a lot of stability and predictability to our labor market, says Riku Aalto, President of Industrial Union.

Aalto considers the termination of the agreement to be another attempt by FFIF to overthrow the Finnish labor market system, which in itself includes much more than just agreeing on working conditions.

– This includes the entire earnings-related pension system and agreeing on it. You may well ask what will happen to the whole structure built together in the future, Aalto continues.

FFIF bases its decision on Thursday mainly on the fact that the negotiation system in the sectors it represents has not been changed enough into local and company-specific direction. The President of Industrial Union finds the view strange.

– Local agreement is commonplace in our forest industry areas as well. But if this is the will of the employers’ side, we are ready to move the negotiation activity even more to the workplace level. Then there is the good question of whether negotiation becomes somehow easier when it is transferred to a company-specific task, Aalto says.

Industrial Union believes that FFIF’s decision will give the union a good opportunity to improve the union density in the sector’s workplaces.

– The importance of organizing becomes even more concrete. And I can assure you that we will not leave our members alone in these twists and turns. On the contrary, we are taking even better care of their interests.

The collective agreements between FFIF and Industrial Union cover about 10,000 employees.

Original text in Finnish at www.teollisuusliitto.fi/2020/10/metsateollisuus-oudoilla-teilla  – this is a  rough translation by Mikko Hakkarainen 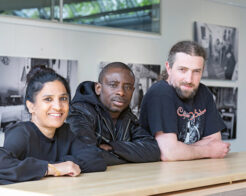 By Claus Jensen, President of Nordic IN and President CO-industri (DK), Vice Presidents Nordic In Marie Nilsson (President Swedish trade union IF Metall), Riku Aalto...
The Hermes project has started! The project has a very important goal: to develop a mobile app, which shares reliable information about Finnish work life...
Print with images Print without images